Air vents and ducts are found throughout nearly every commercial building, whether it’s a business/industry, hospital, lab, or multiplex, such as a high-rise condominium. How effective the temperature control system is depends on the duct sealing. And the more your building uses air conditioning and heating, the more the ductwork expands and contracts, which can lead to leaks. Duct leaks might not be very noticeable or seem like much at first, but they can really add up to become a bigger and bigger problem over time.

The US Department of Energy has said that duct repairs are one of the most beneficial and important ways to improve energy usage. And the American Council for Energy Efficient Economy named ductwork as one of the top 15 energy-saving technologies.

As you likely already know, saving energy will lead to lower utility costs. The average American building owner already spends over $7,800 on energy bills every year. When your ductwork has leaks, an average of 30 cents for every dollar spent is lost, and you’re essentially paying for air that you don’t get. Fortunately, reduced duct leakage through duct sealing can lower energy bills by up to 30 percent. Ultimately, Aeroseal commercial duct sealing can end up saving you thousands of dollars per year.

In addition to saving money, reducing your energy use helps protect the environment. Aeroseal also helps the environment by reducing the carbon emissions leaking outdoors. 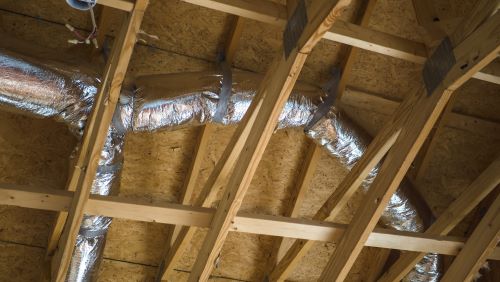 One sign that you may have leaks in your ductwork is if your building isn’t heated or cooled evenly. For instance, if you notice that some floors are cooler or warmer than others. Or if some spaces feel especially drafty, while others feel as if there’s no air circulating at all. Sometimes, this temperature and air flow unevenness can be quite extreme. And this can be increasingly frustrating for you and your staff or leasers to deal with.

When you get Aeroseal commercial duct sealing, the temperature of your building will be more even and consistent, and the heat and cooling air flow will be improved.

Also, sometimes older, cracked ductwork can result in a musty smell or odor, not something you want your staff or customers to be exposed to. Aeroseal commercial duct sealing will get rid of that smell and prevent it from circulating throughout your space. And because Aeroseal lasts longer than other duct sealing solutions, you can count on this improved comfort for years to come.

3. Better for Your Health

Aeroseal commercial duct sealing also makes for better and healthier indoor air quality. When ducts have cracks, this can lead to dust, dander, dirt, moisture, allergens, and pollutants in the air. For those who have allergies, this could make those symptoms, such as sneezing and itchy, watery eyes, much worse. Air pollution can be a serious health risk. And if the duct leaks cause mold spores, that could actually damage your building’s structure as well.

But by sealing the ductwork, air circulation is improved, and the contaminants stay out of the circulating air. This improved air quality means all who inhabit the building will suffer fewer allergy symptoms. And, in general, everyone will be healthier and able to breathe easier.

Another way Aeroseal commercial duct sealing makes your building space healthier is that it allows for more effective radon gas migration because it creates better air pressure and flow.

4. Aeroseal is Safe and Non-Toxic

You don’t want to use a solution for pollutants in your building only for that to lead to even more pollutants. Luckily, Aeroseal sealant is a non-toxic material. It’s a similar material to what’s used in chewing gum. And Aeroseal is used in hospitals, so you know it’s safe. You also don’t have to worry about a strong, bothersome smell, as any odor is mild. It smells similar to Elmer’s glue and will disappear fairly quickly, likely within a day.

Aeroseal commercial duct sealing allows your HVAC system to run at its peak performance. When your system has duct leaks, it’s forced to work harder to make the air flow go where it’s supposed to. The efficiency of your HVAC system can be reduced by 20 to 45 percent. Because sealed ductwork causes less strain on your HVAC system, it can allow the system to last longer.

Another way duct sealing can help you save money, in addition to lowering energy bills as mentioned above, is by reducing the need to spend for future repairs. Aeroseal is typically warranted for 10 years and can sometimes last up to 15 years without needing replacement.

Aeroseal commercial duct sealing is advanced, award-winning, and much faster and more efficient than hand sealing or duct tape fixes. It’s the latest, cutting-edge duct sealing technology and works by turning the liquid sealant into a mist. This mist finds and seals any leaks and only lands where it’s needed. It has been recommended by many industry leaders and received overwhelmingly positive reviews. So this means you can trust you’re getting the best possible solution for duct leaks.

Aeroseal commercial duct sealing is one of the services we can provide at Entek. We’re certified and licensed to install this technology and are a leading duct sealing expert. This service can be completed in hours, and your business won’t be disturbed during the installation process. Entek has been a top-rated service in the Pacific Northwest for over 70 years now. In addition to providing duct sealant, we also have duct cleaning products. If you want to find out more about Aeroseal, we have plenty of information about the duct sealing, as well as about our other services, on our website. 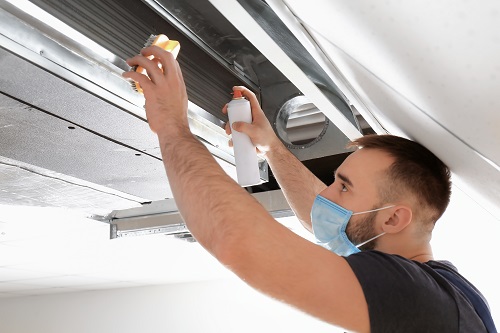