Get that Thing Out of the Window: Changing to Central Air

They’re everywhere, those dirty and bulky air conditioners that sit precariously in windows across the world, always looking like they are about to fall out and land on a Buick several stories below.  If you have relied on window AC units but want to make the switch to central air by adding it to your existing furnace, there is no time like the present. Here are a few reasons why you should make that change sooner rather than later. 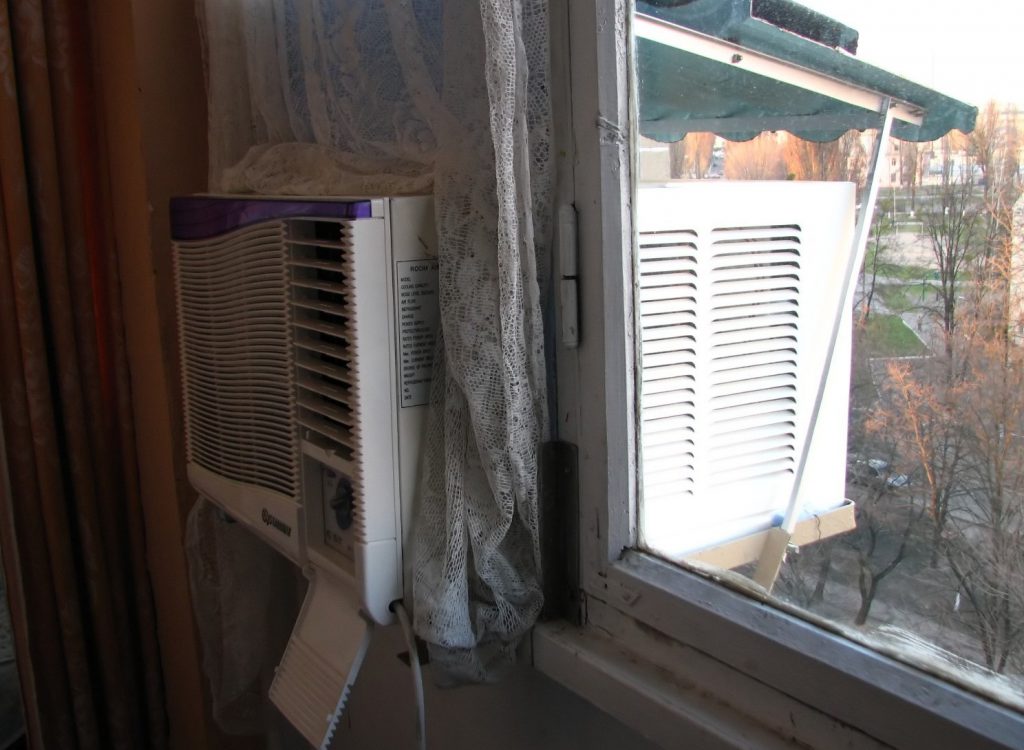 (above: Some kind of monstrosity clearly trying to break into someone’s home through the window…)

There is no doubt that window-mounted AC units are unsightly; further, one usually has to put a piece of cardboard or plywood in the large gap remaining in the window, making it even more unattractive.  Beyond that, there are safety concerns: an electrical unit exposed to the elements can lead to short-circuiting and if it is not mounted securely, the mere pull of a cord by a small child can cause it to tip forward, causing injury.  I’m also not a big fan of advertising to a potential burglar that there is definitely one window which is unlocked and open.

Yes, certainly there will be an initial investment in adding AC to your existing furnace, but you will start recouping that money once the window AC units are replaced.  The individual window units are far less efficient than professionally-installed central air, particularly if there are multiple AC units in different windows.  If you have only one, then you are obviously missing coolness in the entire rest of your home.  The initial cost for central air will depend on a few things, including how efficient you want it to be – the “seasonal energy efficiency ratio” (SEER) is a measurement of the unit’s efficiency; the higher the SEER, the higher the initial investment for installment.  Over time, this money will come back to you incrementally in energy savings, so you need to decide what is best for you, your budget, and your home.

You are already halfway there!

Retrofitting air conditioning into an existing furnace is possible in most homes.  The best news is that if you already have the ductwork, much of the work is done already!  If you don’t have existing ductwork in the home, you can still add AC in a “mini-split” system which is also very high in energy efficiency as there is no ductwork involved at all – a small outdoor unit is linked by small tubes directly to a unit inside that is sleek and mounted high on the wall, so it doesn’t interfere with furniture.  Most homes will have some ductwork, however, which the new AC addition will be able to share with the forced air heat.

While you are at it…

When installing retrofit AC, it is critical that you make sure that your existing ductwork airtight.  Your home’s HVAC accounts for over half of your energy consumption and the ductwork is, by far, the place at which the most heated or cooled air is lost.  Aeroseal is a duct-sealing system that has been celebrated as the best sealant system available. Even the U.S. Department of Energy voted it one of the “Top 100 inventions” of the last 23 years.  There are no thick rolls of foam blocking your air flow, but instead a micro-thin layer of sealant that finds ever tiny hole and crack where the forced air can escape, then seals it.  Aeroseal was even featured on PBS’s Hometime and praised for its state of the art sealant system. Aeroseal is definitely something to inquire about when technicians come to your home. Note: Entek HVAC is the premier installer of Aeroseal in Southwest Washington.

For Your Air Conditioning needs!

At the Push of a Button: Thermostats and Controls that Save you Money